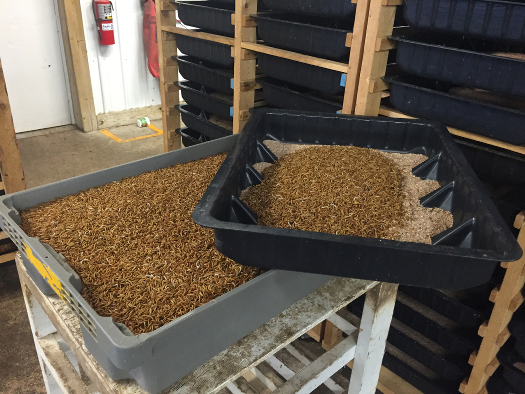 Each week, Todd Goodman feeds 40 tons of grain — a specifically formulated diet milled by Purina that looks like powder. Each day, he ships three tractor trailer loads of product throughout the United States. He exports breeding stock, especially to Europe. He implements extensive biosecurity protocols to prevent the introduction of viruses.

“It’s inescapable. We’re part of agriculture,” Goodman said. “We are farmers. We consume farm products and create a harvestable product.”

His herd? Crickets, mealworms, waxworms, fruit flies and other fare that serve as live food for reptiles, amphibians and arachnids of the exotic pet industry. Nationwide, Timberline is one of fewer than a dozen businesses which raise live food for that pet industry, according to Goodman.

Goodman’s customers include pet stores, exotic pet breeders and major zoos, including Chicago’s Brookfield Zoo and the St. Louis Zoo. He said he also ships product to every Petco store in the U.S.

His employees harvest nine sizes of crickets, some specific customer requests. Goodman explained, for example, a zoo may need tiny crickets to feed a frog the size of a thumbnail.

Crickets, similar to No. 2 corn, and other insects are sold as a commodity, so Goodman created a value-added product, dubbed vita-bug. “We worked to add vitamins so the crickets (raised) in our world have the same nutrients as the ones in the wild,” he explained.

Timberline works with local farmers who take loads of the cricket waste. The company disposes of about 30 tons of waste weekly.

Tom Crawford, who raises cattle in Charleston, Mo., said the cricket waste, which is dry and fine, tested 17 percent protein in a feed analysis, but contains no fat. Crawford feeds 100 cow-calf pairs and 100 yearlings, and picks up a load from Timberline about once a week.

Williamson County farmer Alvin Beasley of Crab Orchard uses the cricket waste as nitrogen fertilizer on his fields. Beasley also delivers the product as fertilizer to another local farmer.

Timberline’s exotic pet food business grew out of a pay-fishing lake venture started by Goodman’s father, Ray, in 1973. After the elder Goodman had difficulty obtaining bait, he started supplying his own bait and then expanded to supply bait to other fishing businesses.