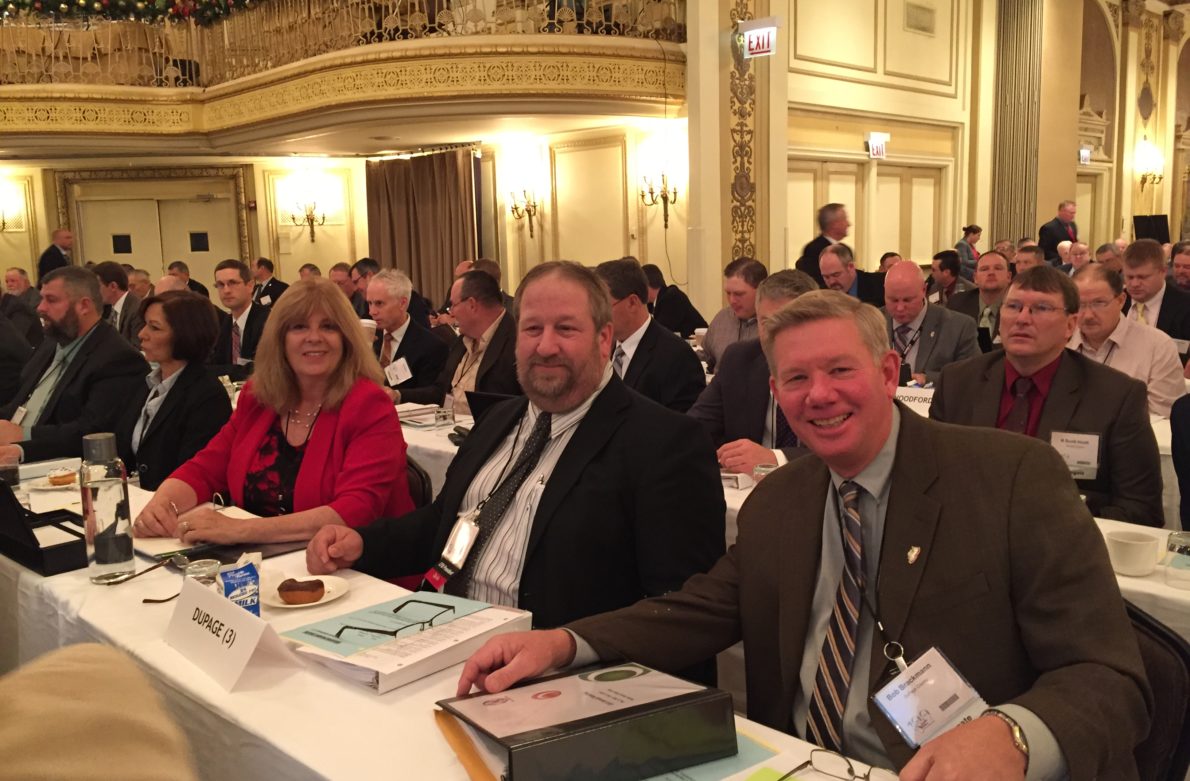 Trump agreed not to raise tariffs further while trade negotiations continue while Xi agreed to purchase more U.S. agricultural, energy and other products from the U.S.

But the armistice wasn’t the only highlight for the more than 1,820 members, staff and affiliates who attended the meeting.

In addition to the opportunity to listen to keynote speaker Captain Mark Kelly and receive county and Young Leader awards, members also enjoyed a visit from U.S. Department of Agriculture Secretary Sonny Perdue and set policy for the coming year.

“I certainly think one of the highlights of this year’s meeting was Secretary Sonny Perdue’s presence and his comments to our delegates about trade,” said Richard Guebert Jr., president, IFB. “We were very fortunate because he wanted to have lunch with a small group of our leaders – members who grow different types of commodities – and they all had an opportunity to ask their questions and talk about what’s most important to them.”

Perdue, who was appointed Secretary of Agriculture in 2017, encouraged IFB members to work with Congressional leaders to urge them to ratify the U.S.-Mexico-Canada trade agreement and pass the 2018 farm bill.

“I always appreciate how sincere and informative the Secretary is when he speaks to our leaders and members,” Guebert said. “He knows the issues and he doesn’t hesitate to answer any farmer’s questions, and I certainly appreciate that.”

Voting delegates for the meeting, totaling 343, also debated and decided on policy for the coming year. While a full range of topics were discussed, issues including the motor fuel tax, recreational marijuana and school security occupied the majority of delegates’ time.

“There was a submittal that the organization should not have an opposed position to that; that was debated quite a bit by the delegate body and at the end of the day, what was put in place for our policy book, is that we would maintain an opposed position to recreational cannabis,” said Mark Gebhards, executive director, Governmental Affairs and Commodities, IFB. “In the event that it is legalized as we move forward with this next legislative session, then the delegate body wants to make sure that it is regulated and taxed accordingly.”

Delegates also discussed policy which provided support for the medicinal marijuana industry, which is currently being reviewed in a pilot program in Illinois.

“Another issue as our state continues to try to get a handle on its fiscal situation is the motor fuel tax,” Gebhards said. “Our motor fuel tax here in Illinois hasn’t been updated in about 28 years. Our policy, before the delegates amended it Monday, was that we would not exceed a 10-cent increase in motor fuel tax. Delegates changed the policy to allow the organization to support a ‘moderate’ increase in the motor fuel tax, giving us some leeway to work with the new administration as they look at amending this tax.”

Delegates also spent time discussing school safety and security, an issue which may not traditionally be considered a Farm Bureau topic.

“School safety is an important issue, and unfortunately, one that I know we all wish we didn’t have to talk about,” Gebhards said. “But I applaud the delegates for taking the time to try and address school safety, and again, what is we want to have in our policy book when it comes to whether teachers should be armed in the classroom.”

Delegates crafted policy to underscore the importance of school security but didn’t go so far as to support arming teachers. Delegates also passed a sense of the delegate body resolution supporting a solution to ongoing trade disputes.

To finish up the day, delegates confirmed the election of one new member to the IFB Board of Directors and eight incumbent directors. Ken Cripe, of Vandalia, Ill., in Fayette County, will serve a two-year term representing members of District 14, which covers Clay, Effingham, Fayette, Marion and Montgomery counties.