During his 14 year career as a veterinary technician, Jason Jenkins developed an interest in wine and began making it in his home. In 2012, he decided to pursue his passion and enrolled in the Viticulture Enology Science and Technology Alliance (VESTA) education program. Jason spent his internship at Fox Valley Winery in Oswego, and was later hired as their Assistant Winemaker. In October 2014, Jason became the winery’s head Winemaker. “I didn’t actually realize I was entering the agriculture industry when I got started” Jason remembers. “Even viticulture (the growing of grapes) isn’t looked at the same way as farming row crops or table fruit. It isn’t until you get into the vineyard and start pruning when it’s 35 degrees or replacing a broken trellis post under a crop load, that the reality that you are indeed farming sets in.”

Fox Valley Winery recently sold their vineyard and now purchases its grapes from vineyards in Illinois, Michigan, and California. Jason sets up contracts with these vineyards each year around February or March. Grape harvest usually takes place between August and October depending on the variety. “I will sample local grapes twice a week once it gets close to harvest” says Jason. “Harvesting only has a 4-5 day window. The yeast in the air and on the grapes will ferment the sugars inside without intervention. Left to rot, grapes will ferment into wine on their own. The problem is that wine really wants to become vinegar. It’s my job to make 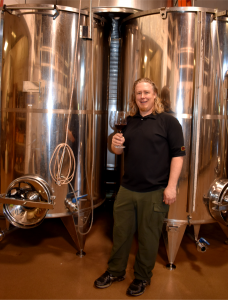 sure this doesn’t happen.”

Once the grapes are harvested and delivered, the winemaking process begins. First the grapes are crushed and destemmed. Red grapes are pumped into a tank for fermentation while white grapes are pumped into a press. The white juice is settled at 32 degrees for a few days and then the clarified juice is separated from the sediment. This process is called racking. The white juice is then warmed up to 50 degrees and yeast is added. It generally takes 2-3 weeks to finish fermenting at 55 degrees. Red wines are fermented between 70-85 degrees for 7-10 days. The extra heat helps extract flavor and color from the skins. When the red wines finish fermenting, they are pressed off the skins and go through a malolactic fermentation, which converts malic acid to lactic acid. Lactic acid is smoother and rounder on the palette. After the wines have fermented, Jason lets them settle for a week and then racks them. A second racking is performed a month later. After another month, the white wines are treated with bentonite to address protein stability issues and are cold stabilized. Once they are stable, they are filtered and bottled. Red wines are generally allowed to age longer. This allows the tannins to soften and the flavors to come together. Depending on the wine style, oak cubes may be added. Once the wine has matured, it is cold stabilized and bottled.

Winemaking is all about chemistry. Jason tests his grapes all the way from the field to opening bottles of the finished product. He consistently checks the pH levels, sulfite content, acidity, sugar levels, and alcohol content of each of his wines. Sanitation and oxygen management are also critical in maintaining a quality product. Oxygen promotes microbial growth and causes irreversible chemical reactions, so Jason limits the wines exposure to oxygen as much as possible once it has fermented. In addition, everything the wine touches must be cleaned and sanitized to avoid organisms that cause spoilage. “As much as 75% of my labor is spent cleaning and sanitizing. Distilled down to its essence, a winemaker is simply a glorified industrial cleaner with a background in chemistry and microbiology” laughs Jason.

Jason currently makes 22 varieties of wine at Fox Valley Winery. Last year, their Petite Pearl won the Governor’s cup for being the best red table wine made from Illinois fruit. “I get most of the credit for what goes into the bottle, but a lot of credit should also go the Viticulturist. It’s easy to make great wine from great grapes. I just need to make sure it stays on the right path. Just like with cooking, the end product can only be as good as the sum of its ingredients.”